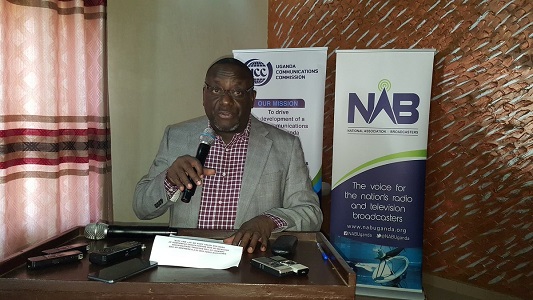 Uganda Communications Commission (UCC) only turns off internet access in the country when there is need to protect Ugandans, Nyombi Thembo, the director for the Rural Communications Development Fund (RCDF) at the Commission has said.

Thembo was responding to a report by the NilePost in which he was quoted as saying that they (UCC) were going to shut down the internet in the forthcoming presidential elections as they did in 2016.

Nyombi Thembo, who between 2011 and 2015 was a state minister for Information and Communications Technology, says he was quoted out of context by the online publication.

He says that while speaking at a conference hosted by Unwanted Witness held at K-Hotel in Entebbe on Monday, someone in the audience asked him why the Commission shut down the internet in 2016.

In response, he says, he told the inquirer that they were compelled to order ISPs to block access to social media because they wanted to protect Ugandans and, if in the coming elections need arises, they’ll do it again.

In other words, they’ll act according to the situation in hand.

“There were compelling reasons to do so to protect the general good of all Ugandans. Uganda was not the first country to suppress internet when there was a need to do so. It was not the first and probably it won’t be the last,” he said, according to a statement posted by UCC on Facebook.

In 2016, UCC had internet shut down access to social media twice, first during the presidential elections and on the day President Museveni was sworn-in.

When the UCC Executive Director Eng. Godfrey Mutabazi was asked why they had shut down the access to social media, he said he had been ordered by then-Inspector General of Police to take action, citing security reasons.

It is during that period that Virtual Private Networks, or VPNs, became popular among Ugandans, including presidential aspirant and former Prime Minister Amama Mbabazi who suggested one of the VPNs Ugandans could use to stay online.

Further defending UCC’s actions, Nyombi Thembo gave examples of other countries that shut down the internet after they were compelled to do so.