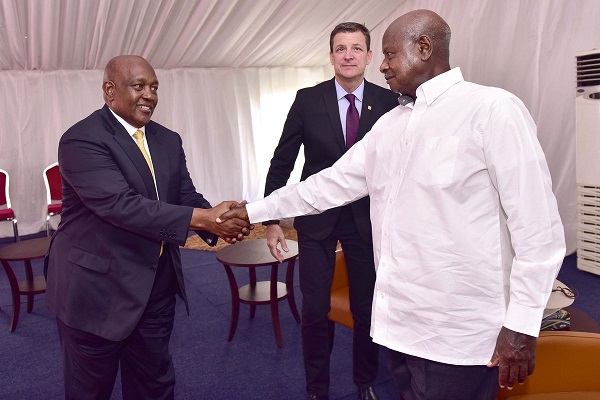 President Yoweri Museveni on Thursday met with some of the top brass from the MTN Group at the Africa Now Summit, a two-day conference that was held at Munyonyo Commonwealth Resort in Kampala.

This was the second time President Museveni was meeting Shuter since the MTN Uganda scandals came to public knowledge.

This previous last encounter was at the World Economic Forum in Davos, Switzerland, where Museveni urged Shuter to float shares of the telecom company on the stock exchange so that Ugandans can be allowed to buy a stake in the company.

“Local ownership is important because it helps us stem capital flight which happens when the company is fully foreign-owned. The question of repatriating 100% of your profits yet there is little value-addition and wealth creation for Ugandans is unfair,” President Museveni advised.

Now, according to NTV Uganda, Shuter confirmed that MTN Group was planning to increase local shareholding to almost 20% in its Uganda unit.

He, however, didn’t commit on how and when they’re planning to follow through with the plan.

Local shareholding in MTN Uganda stands at 4%, and rising it to 20% will bring local ownership up by 16%.

In a Thursday statement, MTN Uganda revealed that the executives had agreed with President Museveni that Ugandan authorities carry out a rigorous review of telephone calls traffic and relicensing terms.

This comes after Uganda has occasionally accused the telecom company of presenting underhand figures for call volume and profits. The telecom company is also operating on a temporary license as investigations into the company illegitimate business operations carry on.

Also met with officials of MTN Group led by their Group CEO Rob Shuter and their @mtnug Chairman Charles Mbire, on the sidelines of the #AfricaNow19 summit in Munyonyo, Kampala. pic.twitter.com/soY9rm2Uzo

Secondly, MTN Uganda, which is the largest telecommunications company in the country, agreed with the president to hold another meeting this month.

Meanwhile, President Museveni assured the executives that he was not fighting the company rather he wants Uganda and MTN Group to reach a ground where both parties can mutually benefit from each other.

“You are providing a service but note that we want Africa to develop, You will do more business in a prosperous, not one on the periphery,” he said, according to the MTN statement.

“Africa’s GDP is $6 trillion while the US is $19 trillion, and yet the US is much smaller than Africa. We should be five times richer. MTN, therefore, should not be part of the hemorrhage of Africa. You must be part of enabling production,” he added.

“MTN is an African company and I support it. However, let us not have lopsided development, with a modern telephone system but the rest of the economy is underdeveloped. The money must saturate properly in the economy, not just in a few sectors.”