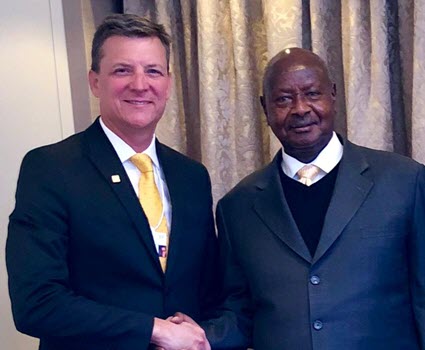 According to a statement posted by MTN Group on Twitter, the two leaders met on the sidelines of the World Economic Forum that is taking place in Davos, Switzerland. It will end on Jan. 25.

On Tuesday, the nation was shocked to learn that two senior officials (a chief marketing officer and a head of sales) at MTN Uganda had been involved in activities that authorities said compromised national security.

Anna Tabura, a Rwandan national and Olivier Prentout, who hails from France have since been deported to their respective countries.

Reports have also emerged that MTN Uganda Chairman Charles Mbire was involved in a plot to remove Museveni from power after using the mobile money department of the company to create a channel for relaying funds to that effect.

On Tuesday, the police directorate of Criminal Investigations summoned MTN Uganda General Manager in charge of Mobile Financial Services Elsa Muzzolin. She was quizzed alongside Anthony Katamba, the Manager Corporate Services, and the MTN Legal counsel.

Muzzolin, who hails from Italy, is said to have been deported.

Aside from the recent developments at the telecom, Museveni and Robert Shuter, according to MTN Group, talked about the company’s commitment to do business in Uganda.

@MTNGroup President and CEO @ShuterRob met with H.E @GovUganda @KagutaMuseveni on the sidelines of the ongoing @wef. Discussions centred on @mtnug commitment to the telco sector and giant strides made during its 20 year term in Uganda. #WEF19 https://t.co/bWVP14qUCJ