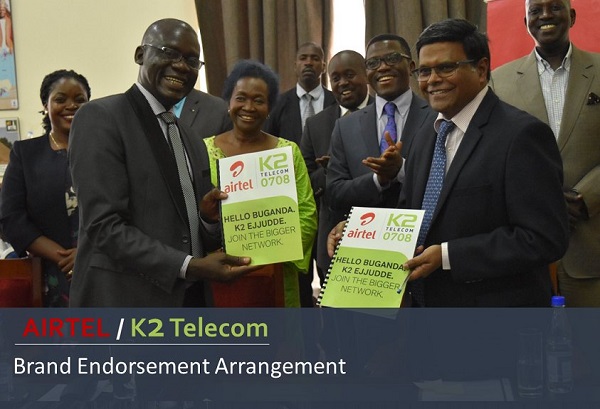 Uganda Communications Commission (UCC) has cleared the air on the recent agreement between telecommunications company Airtel Uganda and Buganda-run K2 Telecom, stressing that it is neither a merger nor an acquisition.

Ibrahim Bbosa, a consumer affairs manager at UCC on Thursday said that the development that many had termed as a takeover is just a partnership that seeks to mutually benefit both parties as they expand their businesses.

According to Bbosa, it’s a brand endorsement arrangement; K2 Telecom entered into the agreement, allowing Airtel Uganda to use her trademark and brand name.

“Under the Brand Endorsement Agreement, K2 customers will continue enjoying the same or similar services with a different code prefix (0708),” he said, adding that the customer migration will be voluntary.

“Customers will exercise their contractual right to either move to Airtel or not,” Bbosa said.

#COMMENTS on the @Airtel_Ug @K2Telecom endorsement agreement.
Is the Airtel/K2 transaction a merger or acquisition? What does it mean for K2 customers? Has @UCC_Official approved this transaction? pic.twitter.com/iyB9YqSVX5

With the partnership, K2 Telecom remains the sole and exclusive owner of the K2 trademark and brand but Airtel Uganda will be free to state that the K2 Trademark and Brand is “powered by Airtel”, according to Bbosa.

Bbosa explained that K2 Telecom customers will have access to telecom services provided by Airtel including voice and data bundles, Airtel Money and value-added services.

“K2 Customers will access support & customer care services at all Airtel’s Points of Sale,” he said.

On his part, the Airtel Managing Director, Mr. VG Somasekhar, said that Airtel aimed at giving back to the people of Buganda through the provision of quality services and reviving the K2 brand so that Baganda continue to celebrate the pride within the Kingdom.

K2 was previously hosted by Africell, before shifting to Smart Telecom after the two telecoms disagreed over pricing of services.

K2 Telecom is owned by the Buganda Kingdom as major shareholders, alongside other managing partners, including former finance minister Maria Kiwanuka and Mr. Kiwalabye Male, the chief executive officer of Buganda Land Board (BLB).

The K2 Company which was established in 2013.