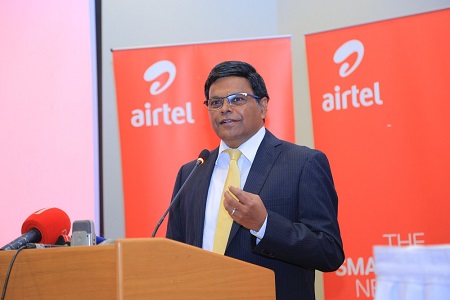 Airtel Uganda Managing Director VG Somasekhar has said the telecom company paid corporate tax for the first time in 2018, having registered its first profit in its 8 years of operation in the country.

3 years in Uganda, Airtel bought Warid Telecom to gain more user base and aggressively compete with MTN Uganda. Airtel was the second biggest telecom and Warid was the third.

Now, according to VG Somasekhar, Airtel Uganda, which is believed to be the most productive subsidiary of Bharti Airtel in East Africa, recorded its first profit, having “wiped out the losses” that had come along with the acquisitions it made.

“We’ve had accumulated losses coming in from even Zain and Celtel and all that. I think, our consistent performance over many years… we’ve now wiped out the accumulated losses and in the year 2018 we’ve declared a profit on which we paid a corporate tax,” he said in an interview with NTV, without revealing the exact figure.

“So, I think we’re among the companies which will be paying corporate tax in this country. So, it is a big milestone for the company to have move from red to black.”

From January to September 2018, according to the NTV report, Airtel East Africa declared 102 million US dollars in profit from 19 million dollar loss in 2017.

Airtel Uganda has over the years invested millions of dollars to expand its footprint in the country. In 2018, VG Somasekhar released a list of over 100 districts it had covered with 3G network and it also had the largest 4G network coverage in the country.

Its mother company is also strengthening its position on the continent after closing an investment deal of US$1.25 billion last year and it is also advanced talks to buy Telkom Kenya and up its rivalry with MTN Group.